I love coming up with new character development questions!

Read on for the newest ones… 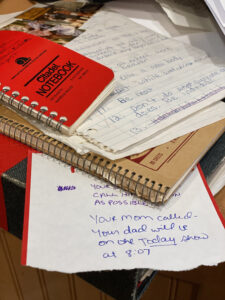 I shared this photo a few days ago in my insta stories because it is such a microcosm of my life growing up.

As I head into my summer of writing I promise more writing tips –check out my newsletter for more of those. If you are not already signed up take care of that by clicking right here.

I’ll have new character development questions for you at the end.

Looking at the photo above I will take you on a tour of Angelique prior to 1983.

The tiny red notebook was a temporary diary in 1976 but had one very very important date in it. The date we got run off of the Ute reservation with their chief archeologist who wanted to show Dad what he was discovering. Turns out he didn’t have permission to bring anyone on the reservation without clearing it with the tribal leaders.
We were back the next day or so with permission. That was the trip with the really tall ladders if you followed me for any time you have seen that photo(see below). Followed later that month (August ’76) by a night spent camping in a cliff dwelling. 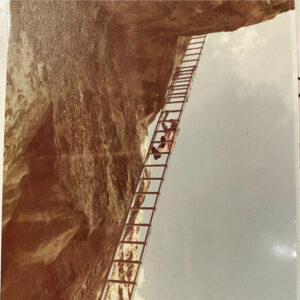 The note shoved under the brown notebook it’s from my college roommate telling me that dad’s going to be on the Today show. Truly an #authorskid moment.

The papers contain my resolution list from when I was about 12 or 13. “Be neat” was important. A note from my friend, Chris is underneath there along with several poems written in 7th grade, and a very old resume from when I was represented by Exclusive Artists(one actress complained that they should be named elusive artists for the lack of auditions she was getting).

The beige notebook is a weird combo of 1978 journal and something I wrote after my friend Dominique was murdered in 1982. Weird that ended up in the same notebook and the binder underneath I think I bought for fourth grade. I loved it because it was denim colored with a red belt.

In the binder there are several stories I began in 1976. By that time I was already writing poetry and short stories.

It’s odd to go through the things I wrote long ago though some of the themes are the same.

Did you see that there was a thing going around on social media, “If you could tell your 18 year old self one thing, what would it be?”
And do it in three words.

I wrote facetiously and kind of seriously “don’t date him.”

The only time I was taken in by someone who was dating me because of my father, was senior year of high school. It never happened again. I hurt for that girl sometimes, but I also moved on to marry the most amazing man eight years later. How much I learned in those short 8 years. And who knows if I hadn’t dated that guy I might have missed out on THE guy.

How much we change…

Here are the new Character Development Questions I promised:

if you look back at your writing from when you were a teenager do you see things that you are still writing about today?

And I would tell her to concentrate as much on her writing as she does on her acting. And practice piano–you won’t regret it.

What would your characters say?

HMMM- food for thought isn’t it? These work for characters under 18 as well. Simply ask, “What would you tell your (chose any)  age self if you were looking back at this time from 20 years in the future? What are you missing? What are you not noticing about yourself or your life?”