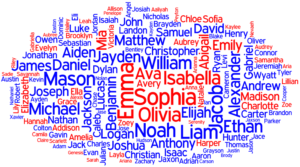 What’s in a name?

I love getting questions like this one that I received recently—”Where do you find and how do you find character names?”

Some writers may choose a name they like while others choose names that have significance. An example: JK Rowling named a character Minerva McGonagall. Minerva is the Greek goddess of war. There is no accident in that name.

Dad liked unusual names and we haunted churchyards and he read journals written at the time he was researching. He had casualty lists from the Civil War among other books in his library and I have no doubt that Tyrel, Orrin and Barnabas came from one of those places.

I have a baby naming book that has been useful for finding significance. I also named two characters after my niece and nephew.

The idea is that names come from everywhere.

Google has been helpful to me to find the timing of a name. Did anyone name girls Sam or Jamie before the 1960’s for instance.

The ideas are everywhere. Remember the peanuts cartoon? Shultz named a character after a candy another after a number. I found the name of one character by looking at the name on the side of a construction site and reversing it.

As far as the significance of names? I looked to make sure our daughter’s names had no hidden meaning we didn’t like so you can bet I also do that for my characters.

I will always look for the hidden meaning.

When I was an actress I would always look up the character names. Many times it helped me to find more character traits, especially if the playwright was a good one because they would choose them specifically for their meaning.

Here is an article on names with negative meanings

Right now I am sitting in a hotel room and there is a note by the plug which reads “120v 60hrz 3.5Amps Max Combined–Max combined becomes “Max Combi” or “Max Combin” Max Combi–wonder what he does for a living?