A long time ago on an island in the Caribbean I met a young actor named Daniel Quinn. We were studying with Sanford Meisner for a month in the most exhausting intensive class I ever took. I was 22 and met everyone for the first time on the trip to Bequia.  We worked hard on our scenes and when we had time we blew off steam. That usually meant going somewhere to eat, drink and swim in the ocean.  The group was 18 actors all staying at a hotel on the beach(cold water only) down the hill from Sandy’s house. We all got to know one another well but there was a core group I spent time with some of whom became friends for life.

The whole experience was fairly exhausting. We were being taught by the master and the 6 day a week class became 7 and the rest of the time was mostly spent rehearsing and panicking wanting to please Sandy with our work. We were fully immersed in the world of acting far away from any distractions. Our down time was spent together and one night I watched Danny tap dance in swim fins brilliantly–I could actually hear the rhythm. I  later learned he had been with NYC ballet and had worked on Broadway and had leads in Woman of the Year and West Side Story. That night I also had the good fortune to waltz with my friend Danny and to waltz with someone who really knew how to dance was to fly and defy gravity.

After class he went back to NYC for a bit then to LA for a part on Baywatch and some other shows. He worked constantly and could do more with a two scene part than many could do with a lead. He made an impression in everything he did and worked with everyone. He loved performing. We spoke on the phone and hung out occasionally. 4 years later we met again and worked in Conagher. I was grateful he was there when I had my first speaking part in a movie. I felt like there was someone I could ask the stupid question of if I needed to. I love that he got a chance to play a L’Amour character. He had a moment to play the harmonica in the movie and asked me what Dad would have wanted him to play so I told him. Red River Valley was a song Dad and I would sing together and he made me sing it into his taperecorder so he could practice it until it was ready.

We remained friends though hadn’t seen each other for a few years. He always was moving forward, promoting his own career, helping others and a few years ago, fighting to keep open long term care at the Motion Picture Home. Everyone involved credits him with being a driving force in that success.

A few days ago I learned that he had passed away in early July. A heart attack while he was helping someone in their yard and he was gone. I have spent the past 24 hours realizing how indelible he is in my life, how many moments he passed through my mind over the years.  From the egg sandwich he suggested I order on Bequia that I now make for myself and my oldest to the tap classes I took last year just so I could dance again. I told him about my flying tap dancing dream when I was going through chemo. He was a love. A kind gracious man. Just wanted to put this up to say –God Speed and I’ll miss you, Danny. 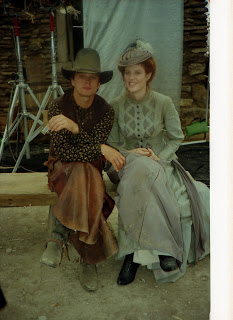 Conagher Summer 1990 Eastern Colorado Daniel Quinn and me.
Share this: