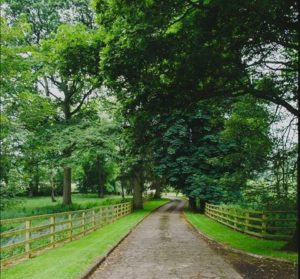 Over years of walking by my dad’s side, I learned a great deal about research and serendipity.

Sometimes when you are searching for something, it just appears before you with almost no effort.

Sometimes just when you think there is no further you can go, events conspire to take you to the next step.

A few years ago I was looking into the Moore side of the family which seems to have originated in France, then headed to Scotland then Northern Ireland. All before 1660.

I found myself seriously looking into Andrew Moore. Andrew is my 7 (I think as I have lost track) times great granddad and he left Ireland in 1723 to head to America. He was a Quaker which is a good thing for they keep very throrough records.

In order to go to a meeting (church service) in a new area, you had to take a letter of introduction with you. In the letter would be listed where you were coming from, how long you had been there, who your parents and grandparents were and, if applicable, the family of your spouse would be listed as well.

In studying the Quaker records and a book by John Passamore, who put down a family history, I found myself in County Antrim on a June day in 2012 looking for a house called Ballinacree near a town called Ballymoney.

We wandered the wrong churchyard for a bit and then headed to the historical society, where I asked for help finding the house and any information on my family.

I felt Dad on my shoulder, I kid you not, as he had never felt it was safe enough in his lifetime to take the family to Northern Ireland. I was doing this for both of us.

The woman pointed to the map under the glass counter top by the register and we searched, but couldn’t find the house. She looked to a man who was just leaving the center and asked him a question, then offhandedly she said, “Have you heard of any Moore’s nearby and a house called…” she paused and looked at me.

“Ballinacree.” I said with the absolutely wrong pronunciation.

“Why sure,” he answered. “There are a lot of Moore’s (he pronounced it Murs) around here. Ballinacree…well you take a right down the street here.” He pointed out the door. “Then you go left at the second stop. Another right at the bottom of the hill and a right at the road a kilometer past that.”

I thought I heard him but I was guessing at that point.

The woman and I looked on the map and there it was. In tiny letters, just where he said it would be was the single word, “Ballinacree.”

She couldn’t give me the map and the other maps she had for sale were different without the house on it, so I took another hard look and we headed out the door.

My husband and our two girls got in the car and started down the road. We took the turns correctly but missed that last right and started across a river.

“Christopher we’ve gone too far. I just know it. We have to go back to that last little road.”

“Why do you think that?”

“My family would build a house on a hill not on the plane of the river.” I have no idea why I thought that.

We turned around and went back to the turn. I had a picture of the gates on my phone that I had found on the internet. Sure enough, in a few minutes we were in front of the gates. Christopher turned the car into the drive and started up a small hill. We arrived in front of the house and I stopped cold.

“Can I just walk up there? I mean, I don’t know them. They might think I am nuts.”

“We’ve come this far. Go to the door,” he encouraged. The girls chimed in, “Knock on the door, mom. Go on Mom.”

So I got out of the car and walked up the steps.

Before I knocked, I took a look from the top step. I didn’t know if they would ask us to leave, so I just wanted one good look at the view Andrew saw on his last morning before he left for America. I turned around and raised my hand and knocked on the door of my family.

I have to add here that, for the most part, the Moore’s, Passamore’s and L’Amour’s who aren’t of our line think we don’t exist. Passamore’s book ended with my great grandfather being born, being married with no kids. So the ones who do all the research have no idea.

The door opened to a lovely woman and I said really quickly, “Hi, I’m Angelique and I need to know if this was the Moore house, Ballinacree. If it is, my 7 times great grandfather was born here and left for America in 1723.”

She smiled and called her husband and then invited us all in with,

“You are in the right place. Do you want to look around?”

The main house had been redone in the 1800’s, but the back courtyard with the dovecote in the middle was original and they showed us around. I got a feel for this place of my past. I thanked her a number of times and recently discovered the couple sold the house last year.

That moment standing in that house in the front hall was surreal, and so meaningful to me. I wished Dad had been there to experience it. Perhaps he was.

Don’t cut corners on your research. You may just discover an incredible experience that brings your story to life.