My latest character question comes from Hobbes first visit to the beach.

The Pacific Ocean is anything but pacific off the coast of Malibu. Often rough, usually freezing cold until late in the summer and even then it is still cold. It is different from Hawaii, the Caribbean or the Atlantic southern coast of the US. 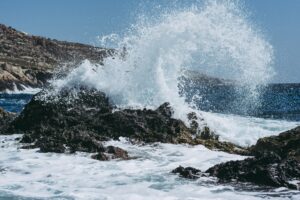 People come to the beach in Los Angeles in May and June and find that the comment attributed to  Mark Twain’s. “The coldest winter I ever spent was a summer in San Francisco,” to be apt in relationship to Malibu and Santa Monica.

(The original quote was by a man named Quin and it was about summer in Paris. Here’s a link: https://www.anchorbrewing.com/blog/the-coldest-winter-i-ever-spent-was-a-summer-in-san-francisco-say-what-says-who/ )

To that end Malibu is sometimes graced by a lack of people in early summer as folks heading to the beach, turn right and head up the coast are stunned by the fog bank hovering over Malibu. Usually the wise ones stop in Santa Monica for their sun until “May grey” and “June gloom” are a thing of the past.

Last Friday our youngest and I took Hobbes for his first look at an ocean. This is a dog who plays in his water bowl, loves puddles, digging in the mud around a drip line and probably will end up in the pool at least once or twice this summer. 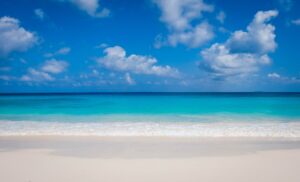 Here is where the character question lies…

What is your character’s reaction to the ocean?

A friend of my husband’s took a group of inner city kids on a hike near the ocean and one of the kids was pointing and asking, “What is that?” To which the guide replied about various bushes, flowers and birds. The kid pointed and asked, “No. What is that?” and finally the guide realized he wanted to know what the ocean was. He had no idea.

I took a drive into Yellowstone with a friend from Connecticut who lived on the ocean but was stunned by how far she could see. Now on a clear day off the coast near her home she probably was seeing just as far, but had no reference points. With mountains and valleys you have reference points and it can be quite stunning to be able to see hundreds of miles. 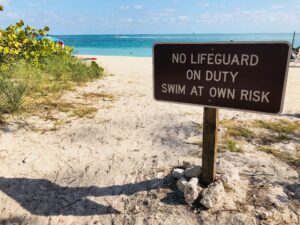 Back to the beach.

That is what stopped him cold.

He jerked his head up and took a step back. We were very determined to let him take is time exploring the beach. He was leading though we did step close to the water and as he got more used to the sound he did too. He got his feet wet but he didn’t really want to go close to the waves. Smart dog. 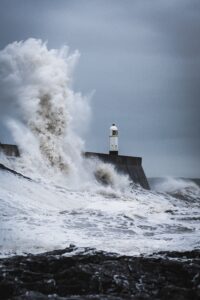 so they weren’t this big…but if you are only three feet tall they still are very big. My empathetic youngest got down beside him and said to me, “It is really different from this height.”

For those of you who live inland one of the first lessons you teach a kid at the beach is to never turn your back on the ocean. You also teach them about rip currents, drifting further away from home base as you play(inevitably you move down the beach and have to hike back), keeping your mouth shut if you go under and tilting your head back a bit to go up if you get carried off. All of those lessons come into play at the beach.

I had only once taken a dog to the beach who didn’t live there and it was Patriot.  I don’t mind having a cautious but not scared dog. After about 20 minutes or so he headed back towards the steps and we followed(he was on a leash the whole time too). It was a successful day. And the air was cool so we were fully dressed and the water temp was just a touch colder so that was okay. We didn’t freeze.

When you look at a character’s reaction to the beach remember to use all your senses and all of theirs too.

Let me say that again,

Remember to use all of their senses.

They have different experiences than you do. Maybe you grew up going sailing in Maine every summer or your uncle was a deep sea fisherman. Your relationship to the ocean is built on your experiences alone.

When Hobbes was first here at our house Edison was doing line checks and flying really low helicopters overhead. One time we were out in the yard and the helicopter came low (really Apocalypse Now sound effects) and he bolted for the house.

Overhead sounds scare anyone but he was little and got really scared. The boom crash at the beach was startling but he wasn’t scared(it wasn’t overhead) but it made him cautious. Good thing as the ocean takes no prisoners. 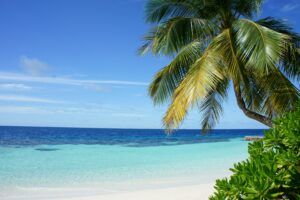 I spent a month on the island of Bequia studying with Sanford Meisner –I was in the water every single day. When I returned my roommate from that trip and I headed to the beach in Marina Del Rey and dove under the first wave, came up, got tossed about a bit as we same in and then walked back onto the beach. We looked at each other and both said, “I forgot how rough the Pacific is here.”

That is the next idea.

My beach experience is not yours.

The water in LA in August is still 60 ish, the water in Key West is about 90 (or so it seems—definitely not cold or even cool). Hawaii water is 80ish cool enough to refresh. Key West water can be bathtub like, Malibu is never calm, but it can be calmer on certain beaches. Note: You never want to go to a surf beach if you want to swim—surfers want WAVES.

How does your character react feel experience the ocean based on their experience and location of the ocean.

Use all their senses.

Hobbes and me at the beach, Photo by Sarah all rights reserved.