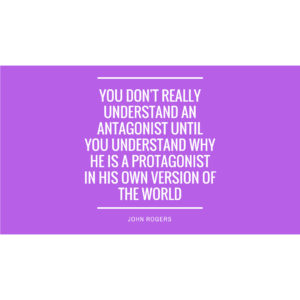 The answer to when are your protagonist and antagonist both heroes is: always. As an author you get to choose who’s story to tell. In developing your characters  you need to develop each of them as fully as necessary. Which means that hero and that villain better be developed completely. You can always change your mind about specifics as you rewrite, but begin with a fully developed person in each position.

Equal forces with equal desires at odds with one another is what you are shooting for.

If you think back to the arc of Harry Potter there is a great example of this.

But I use this as an example because most people have an idea of how the story goes.

You begin with Voldemort being the strongest most evil wizard, who gets defeated, at least temporarily, by a mother’s love. Harry is a baby and Voldemort is destroyed enough to revert to infantile form. Next we see Harry at 11 grow and develop and beat Voldemort who is a leech living off of Professor Quirrell. As Harry grows in power so does Voldemort. Until the final battle when they are equals. Harry chooses to sacrifice himself to save the world which in many ways makes him stronger than Voldemort, at least as a person.

So we must develop our heroes equally to our villains and visa versa. And our hero must grow to meet the challenge of the villain. 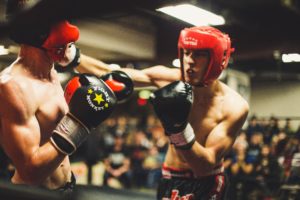 I am suffering through this development myself with one story. I don’t think I actually have a true villain in it. I think I have someone who changes drastically who appears at first to be a bad guy. The lead also begins as a victim, changes to someone demanding something from their lives and ultimately changes and grows and in the relationship with the villain changes him as well.

Tough stuff developmentally and it has taken me a long time to see this clearly to be able to do the next rewrite with my characters truly living full lives where each feels they are the hero. Or am I hiding away from fully developing a villain? Time will tell if the next rewrite is successful.

Remember Hitler didn’t think he was a bad guy. He thought he had the answer to a problem. It was a very evil answer, but he thought he was right. Horrifying, true, but if I were to write a story about him I would have to find the way he thought– which is that he thought he was saving his country.

Boxing, as you can see from the pictures, is equal forces wanting things with equal desire, heavyweight fights a heavyweight and they both want the title. You must have that push back or your characters have nothing to fight against.

If you need more help with character please sign up under the for writers tab and if you want story help sign up for a 1 on 1 hour with me!

Here are those links:  For Writers