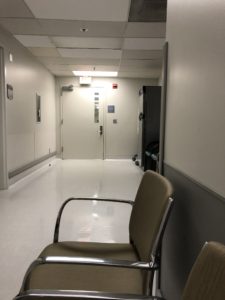 On November 17  I went to my 9 month checkup with my oncologist.

I did blood work and after that had an appointment with my oncologist, the brilliant Dr M. I hired her because I wanted someone to think the scary thoughts for me. I also hired her because I felt she was thorough incredibly and completely thorough. And she is.

After my bloodwork I went to the exam room and put on my gown and after a bit she came in. Before that I had a blessing beyond blessings in that the wonderful nurse who had been with me every step of my cancer journey came to see me. She had left the practice to live closer to her husband’s family for a few years. Her family moved back and I couldn’t have been more overjoyed to see her.

Dr. M came in and checked my breasts, such as they are, my neck and my armpits. She stopped on the left side and went back over the same spot a couple of times. then she said,

“I want you to have an ultrasound.”

The bottom dropped out, but I caught myself as she quickly said, “I’m not worried.”

“How not worried are you?”

“Not worried but we aren’t going to ignore it either.”

I took a deep breath trying not to go slamming into the world of 8 years ago. “Do you think I can get one today?” It was only a bit after 11 so I had my hopes up that I could get some sort of answer before the weekend.

“Let’s see–you get dressed and I will ask Dan to call.”

My appointment was for a 1pm arrival at the breast center at Cedars.

That was where it all started. I tried not to think.

I went off to lunch on Melrose and sat and spoke with one of my best friends for about 40 minutes before I ordered then I ate and headed out the door. I wasted some time looking in boutiques on the street, and then drove to  my appointment.

8 years before I had walked in those doors by myself, and discovered after much ado that I had cancer.

Here I was again. The same kind valet parker took my car and I went inside and up to the 2nd floor.

It never leaves, you know? The fear never goes away.

It just quiets down and sits in a corner waiting for an inopportune time to jump up and shout, “HERE I AM! NANANANANANANA! I told it to shut up and was walked to a small locker room and given a pink robe. Then I was told to sit on a chair in a hallway. The chair like so many others demanded that I remain calm. I could see the doors with different signs on them. Eventually a woman sat next to me. Her sister was a survivor. She didn’t want to know my story. She asked what I was in for and I told her at which point all conversation ended. It was ok by me. At least I wasn’t alone.

So I did the ultrasound and the results came back normal lymph nodes.

Which I took to the bank for about 3 days and then thought,”My original cancer didn’t show on an ultrasound so…” I have since called my oncologist and scheduled an appointment with my plastic surgeon and may even head back to my original Breast surgeon and a second opinion if I feel it necessary.

No stone unturned and all that.

I am not that worried but I am not ignoring it either. I believe in my heart of hearts I am clear of cancer.

But just to throw some gallows humor at the whole thing…

You know when the scientists consider you cured of cancer? When you die of something else.