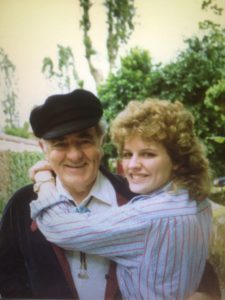 So the last few months have been busy. Honestly, I feel like today is the first day I have drawn a quiet breath. I tried–I went to yoga but I also saw our oldest daughter graduate from high school, our youngest finish middle school and all of us go on a trip to college orientation. I haven’t cried yet. I did cry driving home one day last year about how fast the next few months would go but we were all so busy there just wasn’t time for tears.I am not guaranteeing my behavior on the flight home in August. The airline might need some industrial mops to deal with the tears that day. Right now though, all I want is to enjoy all of it. The last few weeks before she goes should be happy ones and I am always looking for the bright side or at least attempting to do so. I don’t want to spend a minute sad.

Arriving home from orientation a few days ago, I am now the mother of a college freshman. And my book has come out and is available for people to buy. I learned how to boost posts on facebook to advertise its existence and that of my website. It is a book that is for a particular audience. I wish is were a small almost non-existent audience but it is not. There are far too many parents dealing with cancer treatment, raising kids and working. So as the initial excitement started to wane I got down to the grunt work of expanding my audience on the internet through facebook and twitter.  Yesterday I felt a bit aimless though and again today and then I remembered the lesson Dad taught me. When he was trying to sell stories he always made sure he had several in the mail –so when he received a rejection there was always hope, always a chance another story would sell. He received over 200 rejections before selling a story so he did that routine a lot.

Back when I was 18 I finally was allowed to work professionally as an actress and a model. For four years strangers had come up to me asking if I modeled and telling me I needed to see “Nina.” Nina Blanchard, the LA version of Eileen Ford, famous for discovering models and the top agency in LA. I managed to get an interview with her through a friend of my parents. I arrived and Nina had left the building and I was meeting with her second in charge. I held on to my optimism and met with him with a smile on my face. He quickly dismissed me with these words, “You have a high fashion body and a commercial face and your eyes are too small for your full features.” I went home fairly crushed, but the day was young. I thought of Dad and making sure he always had a story out so I picked up the phone and found out two other agencies were having open call days. I went off to see Elite and Wilhelmina West and I was promptly rejected from them too.The end of the day found me thinking, “Well, modeling for me was a means to an end because what I really am is an actress.” I had been doing plays and talent shows and student films since I was about 12. I thought modeling might help me break in, guess not!

So here I sit. I spent 20 years pursuing an acting career and while I did work some nothing took off. I had always written, My whole life l had my journal full of stories and songs and poetry in my bag. I went back to writing and worked hard at it until my cancer diagnosis made it hard to create an alternate reality as I was so overwhelmed by my real reality. I kept the blog and I worked on a book while raising our kids and being a wife and fighting to keep everything, including myself, going. Last week I published the guidebook for parents, Chemo, Cupcakes and Carpools. And today I started back on the long book. The one I have been most passionate about. Because rather than obsessing about book sales I would rather spend my time creating something more. I emailed an advisor and made an appointment to speak with her on Monday morning. I cleared my desk of other things. I sent the advisor the first 10 pages.  I now have something new to work on and I hear my dad in my head telling me to always be moving forward and it is, indeed, the pattern of my life to move forward. If I change direction it is okay as long as I am doing something rather than binge watching a tv show or as dad put it, “contemplating my own navel.”

I can’t wait to see what is next.

Ps –didn’t we all have mullets back then. The picture is from 1985 and we are in France.